As part of the Baler 400 celebration and the 131st birth anniversary of President Manuel L. Quezon, the National Historical Institute brought to Baler the newly restored official car of MLQ during the commonwealth, a 1937 Chrysler Airflow limousine. The car was restored to it’s original condition by Alfred Motorworks in cooperation with Alfred Nobel R. Peres, restorer from the Vintage Car Club of the Philippines. The car was presented to President Gloria Macapagal-Arroyo this morning, August 19, 2009 by NHI Chairman Ambeth Ocampo.

Happy birthday to our Lolo Manuel Quezon, the Star of Baler.

And in honor of our Lolo’s birthday, I have some links here that you might find interesting:

If you’re curious how MLQ sounded like, listen to this 1922 recording of one of his speeches:

Here’s the transcript of the speech (please correct if there are mistakes):

My fellow citizens. There is one thought I want you always to bear in mind, and that is, that you are Filipinos. That the Philippines are your country and the only country God has given you. That you must keep it for yourself, for your children, and for your children’s children, until the world is no more. We must live for it, and die for it if necessary. Your country is a great country. It has a great past and a great future. The Philippines of yesterday are consecrated by the sacrifices of lives and treasures of you patriots, martyrs and soldiers. The Philippines of today are honored by the wholehearted devotion to it’s cause of unselfish and courageous statesmen. The Philippines of tomorrow will be the country of plenty, of happiness and of freedom. A Philippines with her head raised in the midst of the West Pacific, mistress of her own destiny, holding in her hand the torch of freedom and democracy. A republic of virtuous and righteous men and women all working together for a better world than the one we have at present.

With the forthcoming birth anniversary of Philippine President Manuel Luis Quezon on the 19th of August, his countrymen will mark this day as a day of remembrance for his role in instituting a National Language. And yet hardly a handful are even aware that he also shares the distinction as being among the Righteous Gentiles , honored by the Jewish people. He shares that distinction with others more prominently potrayed in cinema or history books as German industrtialist Oskar Schindler (Liam Neeson in the Steven Spielberg opus). and humanitarian Raoul Wallenberg. (Richard Chamberlain in a made for television movie) , or canonized Saint Maximillian Kolbe (his story often seen on EWTN).

Every Filipino should be proud of Manuel Luis Quezon, his courage and his humanitarian spirit which deserve mention. Having opened doors for the persecuted Jews to escape from certain extermination, a grateful nation like Israel values the Philippines own Herr Oskar Schindler and honors the heroes with their rightful place among the Righteous.

We should not also forget about the feisty Brawler from Baler. If an award winning film about the siege of the last Spanish contingent in the Philippine struggle for Independence was made and set in that historic town, would anyone care to do one for a Filipino honored as a Righteous Gentile? Consider the moving line from SchindlerÂ´s List, which a grateful legion saved from extinction carved on a ring they gave their savior. “Whover saves one life, saves the whole world entire.”

These are also interesting:

The Hero We Forgot

An old picture of President Manuel L. Quezon’s birthspot. It’s from an article about Baler published in a magazine in the 50s. I spotted this sometime last year, it was on exhibit at the ANSHS. The marker reads:

“This is the humble birthspot of the Star of Baler and the Father of his Country, beloved by this townmates and his countrymen – the late greatest Filipino Pres. MANUEL L. QUEZON”

If you have old photos like this, scan it or photograph it and send it to batangbaler at gmail.com. I’ll add it to the Old Baler photo pool.

Here are more photos from the recent Nini Quezon visit to Poppo Olag.

The Belmont mansion has been an important part of American history since Ludwell Lee built it in 1799 â€“ 1802. It is important, not only for its refined expression of Federal-style plantation architectural design, but also for the generous hospitality and solace it has provided noted people throughout the years. Local tradition says that Mr. & Mrs. Lee opened the mansion to the President and Mrs. Madison during the war of 1812 while Washington, D.C. was under siege. In addition, Belmont has opened its doors to other presidents including Presidents Harding and John Quincy Adams. Marques de Lafayette was a distinguished guest who is said to have presented Mr. Lee with the mantle pieces in the Library and Parlor as an expression of his appreciation during his last visit to America in 1825. Mr. Lee served as aid-de-camp to General Lafayette during the Revolutionary War.

The Quezon Family, Leesburg 1942. Nini Quezon is on the extreme right.

The mansion and its surrounding property have had a number of famous owners. The first, Mr. Ludwell Lee, was a son of Richard Henry Lee, who was a signer of the Declaration of Independence. Following Mr. Leeâ€™s death, Margaret Mercer, daughter of a former Maryland governor, established it as a progressive Christian school for ladies. Former governor of Kansas, Frederick M. Staunton, purchased the mansion as a residence, Mr. & Mrs. Edward McLean owned the mansion from 1915 â€“ 1931. Mr. McLean was the son of the owner/publisher of The Washington Post. Mrs. McLean was the owner of the Hope Diamond. President Hooverâ€™s Secretary of War, Patrick Hurley, owned the property and rented it to the Philippine government in exile headed by Commonwealth President Manuel L. Quezon during World War II. In 1995, Toll Brothers, Inc. purchased Belmont and restored the mansion to its original elegance.

Belmont was added to the Virginia Landmarks Register in 1976. The mansion is also listed in the National Register of Historic Places with the United States Department of Interior. The Belmont mansion stands on the point in Eastern Loudoun County, which is quite appropriate since Belmont means “Beautiful Mountain.”

And here’s an informative post about the Mansion from MLQ3.

There’s an ongoing exhibit at the Museo De Baler (Quezon Park) about Pres. Manuel L. Quezon and his Social Justice program. It was probably opened last August 19 but I only saw it last week. It’s titled Justice For All which reminded me of the Metallica album. The text on one panel says:

President Manuel L. Quezon beleived in the worth and significance of the common man. This belief is at the heart of his campaign for social justice which he championed throughout his presidency.

President Quezon sought to achieve social justice by protecting the rights of laborers through legislation and personal projects, and by creating more jobs for the common man. He believed that work is the measure of a man therefore man must be allowed to improve his lot and the government must help him. He empowered the disenfranchised: women were given the right to vote, tenants a chance to own land, laborers protection from ill working conditions. He put in place an effective educational system and provided the poor with knowledge and skills to better themselves.

He strove to protect our country from dangerous class wars, a danger that persists to this day. He envisioned a country united despite diferences in social class and creed, and a time when this campaign for social justice would no loger be necessary. He appealed to each Filipino’s moral impulse to protect his fellowman.

This exhibit traces one man’s efforts to ensure justice for all and to unite them all under one nation. Let it be a testament. Let it be a lesson to all generations.

Here are some pictures: 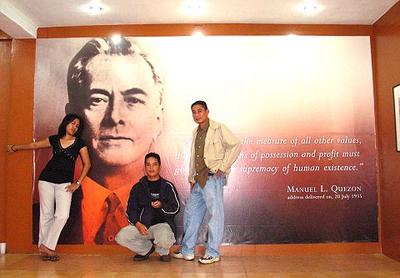 This morning with Else (left) and Donnel (right) at the Museo De Baler, posing with the man. There’s this exhibit there titled “Justice For All” – all about MLQ’s social justice program during his presidency. Lots of great pictures. And I noticed the Museum has updates, i’ll post more pixes later.

This is the first time I used the new image upload feature of blogspot. I’ll see if this can reduce bandwidth on BB. (update: hey they shrunk my picture, i think i’ll use my own server.)