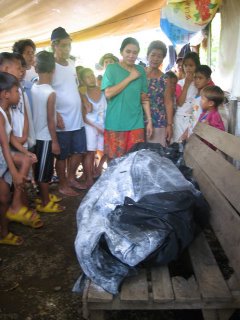 Lone Fatality. A wife, a mother, and three children â€“ all before the bag containing the body of Joel Tan, the lone fatality of three days of heavy rains in Dingalan brought by an active low pressure area.

Joel drowned Wednesday January 25 after being swept by a strong river current towards Dingalan Bay. His body was found two days later, along a cove in a nearby barangay.

At the time of the accident, Joel was carrying his nine-year old son Biboy. The kid miraculously survived after clinging onto a tree trunk.

I’m doing a project for the Aurora Day celebration and Mrs. Mesina gave me a sackful of photos to be scanned. Here’s a couple of samples.

This one looks like a procession in front of Baler Church. It was taken from the belltower of the church looking southeast. The street is the current San Luis St. and the area with a circular concrete is the front yard of the old municipio.

I’m guessing that these two picture were taken in the 1950’s.

The project i’m doing by the way is a short documentary about DoÃ±a Aurora Aragon Quezon. If you have pictures or information that you can share, just email it to me at batangbaler at gmail dot com or post it at the comments area. Deadline is next week.

from Manila Bulletin Online: Aurora towns swamped by floods as deep as 10 ft: “Low-lying villages in Baler, Ma. Aurora, Dingalan and three northern towns of Dinalungan, Dilasag and Casiguran were swamped with floodwaters, which buried communities under 10 feet of water.”

from journal.com.ph: 3 die in Ecija, Aurora floods: “AT least three persons died while thousands of families remained encamped in different evacuations centers in Region 2, and 3 particularly in Nueva Ecija and Aurora provinces.”

from inq7.net: 2 killed, 170,000 people displaced by floods in Luzon . “Flooding in the towns of Dingalan, Dipaculao, and Baler in Aurora province have subsided but all roads leading to the province remain closed to traffic due to landslides”

from The Manila Times Online: Off-season floods leave one dead. “Although floodwaters in Dingalan, Dipaculao and Baler in Aurora had subsided, roads leading to the province were blocked by debris from landslides.”

from M&C News: Man drowns, thousands evacuated in flooding in Philippines. “Joel Tan, 35, drowned late Thursday after he was swept by flashfloods in Dingalan town in Aurora province, 150 kilometres north of Manila.”

from inq7.net: Aurora folk cope with life after tragedy.

The floods came early this year. Here’s some snips from inq7.net. The italicized parts are my additions.

“In Aurora province, heavy rains have submerged all 24 villages in Casiguran town under two to eight feet of floodwaters, and triggered landslides that isolated the northern parts of the province, Gov. Bellaflor Castillo-Angara told the Inquirer by phone. The flood, the second to hit Casiguran in three weeks, has forced 25 families to evacuate to the town hall. Four rivers that cut through the town have overflowed.”

The last flash flood that hit Casiguran was on December 27-28, 2005. Mayor Bitong of Casiguran said in a radio interview yesterday that this one is worse. He said that the cause of the frequent floods is the logging operation in the area. The Dicadi (Dinalungan-Casiguran-Dilasag) area is now isolated again and the roads are still unpassable.

“In Baler, the capital town of Aurora, floodwaters in Barangays Buhangin and Cabcab rose up to seven feet on Wednesday night, forcing residents there to flee to high grounds. The water began subsiding on Thursday.”

That Cabcab is Sitio Gabgab in Buhangin. Other areas affected in Baler were Brgy. Obligacion, some parts of Calabuanan, Brgy. Pingit, Sitio Kinalapan, Bognoyas (Buhangin-near the cemetery), Puduk and Binilwag (Monrio), Pulo (Zabali), some parts of Duungan (Burgos St. near TESDA) and Reserva. AV Mijares Elementary School was also flooded. A portion of the riprap wall in Kinalapan River also gave in and part of the overflow bridge in Dicaloyungan was damaged.

“Floodwaters in Diteki and San Isidro villages in San Luis reached up to four feet.”

San Isidro was heavily flooded – again. Other flooded areas in San Luis are Ditumabo and Real. A person was electrocuted in San Isidro.

“Angara said that while landslides cut off the road network to Casiguran, Dinalungan and Dilasag towns, central Aurora continued to be accessible through the Pantabangan-Canili Road via Nueva Ecija. The Bongabon (Nueva Ecija)-Baler Road was not passable.”

The Pantabangan-Canili Road is “hardly” passable.

“Rampaging waters washed away the steel bridge in Dibacong in Casiguran and a temporary bridge in Villa, Ma. Aurora.”

The Cabituculan area in Ma. Aurora was also flooded – for the first time.

After many chismis and fake news about a bus falling of a cliff somewhere in the Sierra Madre, it finally happened. A D’Liner bus rolled of a road in Ditailen, Ma. Aurora, Aurora yesterday morning after hitting a tricycle. There was no fatality but most of the passengers suffered broken bones, bumps, bruises, minor and major wounds. Passengers in critical conditions were airlifted to Cabanatuan. The accident happened around 8:45 am when the driver of the D’Liner bus on the way to Maria Aurora from Cabanatuan was managing a steep incline in Ditailen. The the driver tried to avoid a tricycle that cut into the bus lane. The tricycle was hit and the bus rolled over fell off a ravine the road. The tricycle driver is now in critical condition.

Last January 3, there was a mistaken report that a D’Liner bus fell of the cliff along the Maria Aurora – Pantabangan road.

from sun.star Pampanga: Trade prods C. Luzon provinces to trade Aurora products. “The Department of Trade and Industry (DTI) is encouraging businessmen in Central Luzon to look into the three major opportunities found from the abundant resources in Aurora province. Blesilda Lantayona, DTI 3 regional director, announced that Aurora province currently offers three major potential business projects for interested investors, companies and funding institutions geared towards turning Aurora into a producer of these consumer products. According to Lantayona, these projects are the proposed seaweed culture and production project; the expansion of the small-scale coco wine production project, both in Casiguran town; and the virgin coconut oil production project in San Luis town.”

This pictureses are lying in the leftover bin of the BB server and need to be put to use. Part 4 of the Behind the Scenes series of the Best of Central Luzon coverage. October 2, 2005, Marilao, Bulacan.

All these seats were taken.

The Aurora media delegation. All three of them.

The crowd. Third from left is Board Member Zeny Querijero.